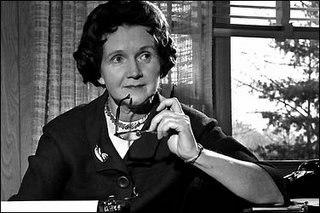 Rachel Louise Carson was a charter member of the “reality based community.” Upon reading the latest revelations about Greenland’s glaciers in Friday’s Washington Post, I found myself reviewing the experience and words of Rachel Carson. Her publication of Silent Spring in 1962 gave birth to the modern environmentalism movement. Ostensibly, the purpose of Carson’s book was to educate the public about the dangers of DDT and the harm inflicted upon nature by the pesticide industry. Carson was a university-trained biologist who served in the Federal Fish and Wildlife Service and published numerous books about the world’s oceans in the forties and fifties. With precision, hard data, and powerful prose, Silent Spring illustrated the dangers to our food supply, nature, and way of life. The Tom DeLays of Carson’s time responded with a vengeance and warned that her book would cause starvation and famine. Dollar signs were more important to the pesticide industry than sparing generations from daily exposure to toxic chemicals.

Thankfully, President John F. Kennedy and his wife read a condensed version published by The New Yorker and he commissioned the President’s Science Advisory Committee to study the problem of pesticide use. In those days we had a President interested in hard facts and data. Less than a year later the commission issued a report confirming the damaging effects of toxic pesticides. A month before the report was made public, CBS television broadcast a documentary entitled, The Silent Spring of Rachel Carson despite pressure from sponsors not to show the documentary. This was another time and while broadcasting networks were certainly influenced by corporate sponsors, they also had a social conscious that transcended profits.

The exposure resulted in numerous requests for Carson to speak to the dangers of pesticides in the environment. In 1963 she testified before a Senate committee on environmental hazards, insisting that the public had an inalienable right to be free from poisons introduced by others into the environment. Carson also advocated in her testimony for the creation of a Federal agency, free from influence by the private sector to regulate the use and creation of pesticides. Her recommendation later became the Environmental Protection Agency that banned the pesticide DDT in 1972.

Although Carson’s research addressed issues far removed from today’s challenges, her words echo across time and further illustrate just how shortsighted we’ve been in the care of our planet. This passage in the final third of Silent Spring is especially striking:

“Through all these new, imaginative, and creative approaches to the problem of sharing our earth with creatures there runs a constant theme, the awareness that we are dealing with life – with living populations and all their pressures and counter-pressures, the surges and recessions. Only by taking account of such life forces and by cautiously seeking to guide them into channels favorable to ourselves can we hope to achieve a reasonable accommodation between the insect hordes and ourselves.”

Carson was really speaking to implications far broader than pesticides. Two years before the Beatles first appeared on the Ed Sullivan Show, she was attempting to warn humanity that nature was far more powerful than the modern world. Carson’s wisdom is especially poignant today. Indeed, it is apparent that our planet should not only be respected but also feared. Global warming may well be God’s blowback for dissing mother Earth. Yet our so called religious President and his culture of life Republican Party see fit to punish anyone who dares speak truth about this unseen ticking time bomb. Bush’s propagandists have taken to boasting that the President is reading biographies about his predecessors because he’s determined to be a “transformational” figure in history. Sadly, our President and his followers don’t seem to grasp that in 2006, preservation of our planet is far more important than bestriding the globe as a 21st century Caesar. Hence, I’d prefer that his librarian wife retrieve a copy of Silent Spring for him to read instead.
Posted by Robert Ellman at 11:59 PM

Bush has missed a tremendous opportunity (as have both the Democratic and Republican parties) to be a powerful transformational figure, a force for good and for healing. But he has chosen to turn away from a future guided by principle, instead choosing like so many failed political leaders (and tyrants) to ignore the warning signs. We could have been the bow wave for a healthy future, had we pushed for conservation, eliminated corporate welfare for the fossil and nuclear fuel industries, supported the alternative energy industries, enforced the environmental laws on the books, joined the Kyoto Treaty and pushed for more stringent international law (and actually followed the treaties we've already signed). But instead, we are being left in the dust already lifting from Europe and South America's rapidly speeding heels.

Bush and Congress have chosen the past, the dirty and poisonous technologies and attitudes that will harm us all. Alaska's congressional delegation and governor make frequent reference to "Outside environmentalists" and "environmental extremists", and always the word "environment" in association with words denoting wacko-ness or intruders, as though Alaskans or good Americans, for that matter, could not possibly be or ever WANT to be associated with environmentalism. That attitude is rampant in the White House and in Congress today.

Daily Dickel is profane, vulgar, politically incorrect and entertaining. The man behind it is a good friend with a sick mind!
*
this is crap and hurts many people! why would you hav ethis on here?!!!!

Daily Dickel is harmless fun. If you see my friend as hurting people compared to a President who wages illegal war and robs from the poor to give to the rich, then I respectfully suggest you may have emotional problems and should seek help. These are serious times and people need to laugh. I right about serious things in a serious way but I appreciate my friend who has a sense of the absurd. Furthermore, I don't believe in censorship - as my publishing your absurd comment illustrates. See a therapist and get a life.