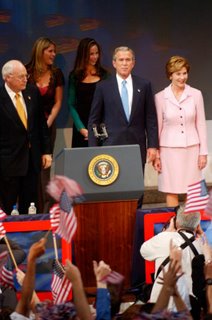 A few months back a colleague I discuss politics with chastised me in colorful language for even suggesting the possibility of impeachment. This was during the immediate aftermath of the Downing Street Memo. My point was that Bush clearly lied about the rationale for war and if the Democrats took back the House of Representatives, John Conyers would become the House Judiciary Chairman.
Conyers is one of the few Democrats I have any respect for these days. Most of the Democratic Party is a lump of spineless parasitic flesh, which consumes much, discharges odorous waste, and accomplishes precious little. Conyers however seized on the Downing Street Memo to rally outraged citizens all over the country and obtained a half-million signatures on a petition demanding answers from the White House. Prior to Conyers efforts the mainstream media was more than content to ignore the Downing Street Memo. Not surprising because the so-called liberal media is nothing but a propaganda stenographer factory for President Bush and his corrupt cronies. Conyers forced them to pay attention.
It was also John Conyers who took the lead in reporting on the electoral follies in Ohio last year, illustrating how George Bush once again prevailed illegitimately and illegally. I have no doubt that he has the steel and conviction to see impeachment through. Especially after the Judiciary Committee he serves on impeached President Clinton for lying about an extramarital affair under the leadership of counter culture reactionary, Congressman Henry Hyde.

My colleague proceeded to accuse me of living in a fantasy world for contemplating any impeachment scenario. Several months later we lived through Hurricane Katrina and President Bush brazenly boasted he authorized domestic surveillance without relying on court issued warrants through the FISA protocol. Katrina may turn out to be America’s Chernobyl and the new revelations about domestic surveillance have put George Bush on record for willfully disobeying the law. When combined with continued bloodshed in Iraq, new revelations from the Abramof scandal, and a looming health care crisis it’s not so far fetched that the Democrats just might recapture Congress in spite of their political ineptitude and impeachment is now openly discussed.

The bill of particulars against President Bush committing high crimes and misdemeanors is both substantial and credible:

The above points are a far more compelling rationale for impeachment than lying about an extra marital affair. This President did commit high crimes and misdemeanors and the House of Representatives would absolutely be justified in holding hearings to deliberate about these matters.
My question is whether impeaching President Bush is truly desirable. In 1974 this country was fortunate to have an honorable and decent man serving as Vice President in Gerald Ford. If a Democratic Congress is elected they must weigh the consequences of making Dick Cheney President. Bush at least is out of power in January 2009 and much of his agenda is now stalled. The man is a limp lame duck who is even retreating on his Iraqi policy. A Democratic Congress just might be able impose its will against this weakened President.

But a President Cheney will be difficult to dislodge or neutralize. Far from being a lame duck, a President Cheney will exploit the institutional powers of the White House to rally a divided Republican Party and hold onto power. The nomination would be his for the asking, as he would intimidate all sources of campaign financing not to support any rivals in the Republican Party. Meanwhile, the mainstream media as we have seen in recent years will probably assume a posture of subservience with only token critical reporting. They will go out of their way to help him rehabilitate his “Darth Vader” image. One can just imagine how reporters will describe a “new Cheney” just as the press lionized a “new Nixon” in 1968.

Ultimately, if a newly elected Congress were to impeach and remove President Bush it will put this country in greater peril. Whereas at least today we have a light at the end of the tunnel on January 20, 2009 - because whoever wins the Presidency in 2008 has to be more honorable and competent than George Bush. I therefore propose that the Democrats go after Vice President Cheney instead.

Vice President Cheney is the true power behind the throne anyway. Impeaching and removing him from office will serve multiple purposes: it will salvage and restore honor for America in the eyes of the civilized world as we stand up for the rule of law; the ring leader of the neo-cons will be disgraced and out of power; and a weakened President Bush will have to select a new Vice President that the Democrats approve of. Also, for all the lore about Bush’s fidelity to loyalty, there is already a distancing between Cheney and the Bush clan. Brent Scrowcroft would not tell the media that “I don’t know Dick Cheney anymore” without the permission of George Bush, Sr. George Bush might be relieved to be cut loose of Cheney. Cheney would have little choice but to take a bullet for the White House. Meanwhile, the symbolism of impeaching and removing Cheney would have considerable value while reaffirming constitutional principals about the rule of law. Future Presidents and Vice Presidents will remember the fate of a disgraced Dick Cheney.

Some out there might just wonder: why can’t we impeach both? It is doubtful that the body politic can absorb the impeachment and removal of a sitting President and Vice President no matter how justified. That would mean the Speaker of the House becomes President. While George Bush became President as the result of a legalistic coup in 2000, the entire political establishment would have a conniption fit at the prospect of Nancy Pelosi becoming President under such circumstances if the Democrats take the House of Representatives next year.

This is going to be a campaign issue in 2006. Liberal special interest groups will exploit the possibility of impeaching Bush to rally the party’s base. Meanwhile the Republicans will also rally their base by warning that an emboldened Democratic Congress will try to impeach President Bush. I maintain that Dick Cheney is the right target. Impeaching Bush is tantamount to indicting Kermit the Frog when everyone knows it’s really Ms. Piggie who wears the pants.

Posted by Robert Ellman at 7:46 PM

Just file a complaint with your District Attorney that Bush has already implicated himself of breaking the law, and the DA will have no choice but to file felony charges on him. That is better than Impeachment.

While I agree that both Cheney and Bush are on the run, I don't think the Democrats will re-take the House, and therefore, there won't be any impeachment.

Congressional elections are no longer about democracy. Most Congressional districts have been gerrymandered to virtually guarantee that the incumbent wins the election.

I think it's Democratic dreaming to think the Republicans will lose the House.

My bet: There will be no victory for the Democrats in '06, and there will certainly be no impeachment hearings against either Bush or Cheney. (Though if the Republican party had any spine left, they would be asking important questions about Bush, Cheney, Rove and DeLay.

But, alas, the Republican party has become more spineless and corrupt anyone would have imagined.

I wouldn't be so sure. The respected Cook Report has noted that inspite of gerrymandering the House is very much in play. The Democrats are doing a surprisingly effective job at recruiting military veterans in an attempt to replicate the campaign effort against Jean Schmidt in a very conservative Ohio district that fell short by a whisker in a special election last summer. And that was before Hurricane Katrina and many of the latest revealations.

Also the Supreme Court is going to rule next year about Tom DeLay's redistricting scheme in Texas and that could have a huge impact.

So impeachment may well be something Democrats have to face and I'm certain it will be a campaign issue for candidates everywhere.

you ask 'whom to impeach?'
i reply 'where to begin'
nice work by the way. http://einkleinesblog.blogspot.com/

Thanks. I thought your post about Governor Rendell was quite interesting. At one time I was impressed with him and I'm dissappointed to read he's just another Democrat who isn't the real deal.

As for impeachment, in my heart I'd like to see Bush, Cheney, and his entire cabinet frog marched out of the White House in handcuffs. But I think we have to measure the potential repercussions and damage. Nailing Cheney I believe is the surgical way to go but admittedly not total justice.

I urge you and your readers to take a few minutes and examine:

It's a list of the 25 most recent comments made by real Americans participating in an online poll/letter-writing campaign concerning the impeachment charges recently filed against Vice President Cheney, which are now being evaluated by the House Judiciary Committee. Comments can be sent to elected representatives and local newspapers at your option. The participation page is at:

Since this campaign began, three members of Congress have signed on as co-sponsors, in part due to hearing from their constituents. Make your voice heard!